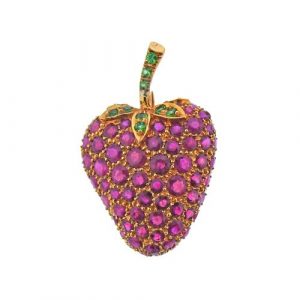 American designer and jeweler David Webb is best known for his sculptural animal motifs and his use of textured gold, colored gemstones, and carved rock. In his early career, Webb made weekly visits to the Metropolitan Museum of Art, where he was inspired by the goldwork of the ancient world. He eventually created his own mixture of alloys, using them in his jewelry and objets d’art. As Webb said, “I believe the things I make have museum quality and, hopefully, will last as long as the originals that inspired them.” The upcoming sale, presented by SAJ Auction, highlights a pair of nephrite, coral, enamel, diamond, and gold objets d’art by Webb.

Another highlight of the auction is a gold and diamond Tubogas cuff watch from Bulgari. Introduced in the 1940s, the Tubogas design was inspired by the distinct shape of gas carrier pipes. The motif was revived by Bulgari in the 1970s, becoming one of the firm’s trademarks. A Tiffany & Co. bangle bracelet by Jean Schlumberger is also available. The white enamel bracelet has a gold band and collet-set diamonds. View the entire catalog for this event at Bidsquare.