Saturday at Sotheby’s: Asian Art Featuring Chinese Art from the Metropolitan Museum of Art – The Florence and Herbert Irving Gift by Sotheby’s 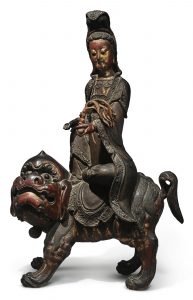 In Buddhist teachings, Avalokiteshvara was close to nirvana when he decided to stay behind and help others. His name means “lord who looks down with compassion”. In a coral piece available in the upcoming Asian Art auction, offered by Sotheby’s, Avalokiteshvara stands on the back of a dragon, attesting to his other-worldly presence. Like the coral Avalokiteshvara, the more than 500 lots in Sotheby’s auction represent Chinese culture throughout many centuries.

Another notable piece featuring Avalokiteshvara is a figure made of lacquered and giltwood. The piece was produced between the late Ming and early Qing dynasties. Avalokiteshvara stands on an armored beast, once again keeping an eye on those below.

Beyond Avalokiteshvara figures, this auction also offers Chinese landscape paintings. Among the most notable pieces is a series of four painted porcelain plaques. This piece is more modern than others available in this auction, produced in the 20th Century. Each frame also has a poetic inscription. A more unusual piece in this auction is a set of twelve painted pottery animals representing the Chinese Zodiac. Produced in the early Yuan Dynasty, each of the Chinese Zodiac animals, from the dog to the dragon, are represented. Register to bid online on Sotheby’s website.