Sacred Splendor: Judaica from the Arthur and Gitel Marx Collection 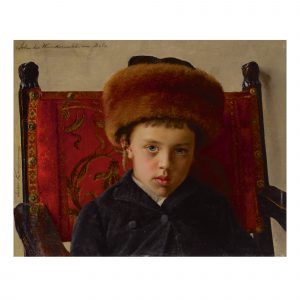 The upcoming Sacred Splendor auction, offered by Sotheby’s, is a collection of Jewish books and manuscripts, paintings, and metalwork from the Arthur and Gitel Marx Collection. An early English translation of the Siddur, a daily prayer book according to the Sephardic rite, will be featured. This version of the Siddur was never printed but was rather copied by a professional scribe. The English translation was circulated extensively due to the Jewish community’s early regulation of printing licenses for translated works.

Also up for auction are several paintings, including The Son of the Miracle-Working Rabbi of Belz by Isador Kaufmann. The artist was an Austro-Hungarian painter who traveled through Eastern Europe painting scenes and portraits of Jewish and Hasidic life. The Rabbi referenced in the title of the painting is Rabbi Shalom Rokeaḥ, who founded the Belz Hasidic Dynasty in the early 1800s. One example of the many silver works in the sale is a decorated cup with engraved roundels. The base is marked “Darmstadt” in Hebrew. There were originally four of these cups, three of which were purchased for the Frankfurt Museum before World War II. View any of these lots and register to bid at Sotheby’s.