Sacred and Imperial: The James and Marilynn Alsdorf Collection Online 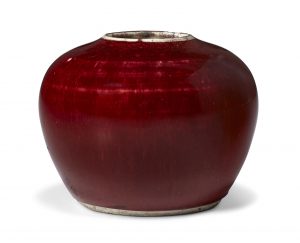 In Hindu mythology, the deity Shiva is believed to embody enlightenment, compassion, and auspiciousness. An 18th-century painting of Kali trampling Shiva is one of the notable lots of the upcoming Christie’s auction. The painting depicts Kali, the goddess of death, standing over Shiva’s chest. She holds a sword and the severed head of a demon in two of her four hands. In this depiction, Shiva (her husband) was trying to stop Kali from destroying the world. The painting was likely completed in Rajasthan, India.

Sacred and Imperial: The James and Marilynn Alsdorf Collection Online auction will also present an iron kapala and cover from the 17th or 18th century. In Vajrayana Buddhism, the upper cranium of a human skull (kapala) is used for several tantric rituals to transform impurities such as ignorance, greed, and delusion into forces of goodness. This particular kapala bears an inscription in Tibetan on the underside along with scrolling lotus motifs on the lid. Visit Christie’s for more information and to register to bid.