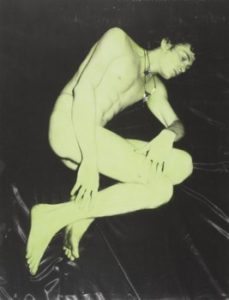 American photographer Robert Mapplethorpe documented the queer subculture in New York in the late 1960s and early ‘70s. Mapplethorpe was also celebrated for his subversive nudes, floral still lifes, and monochrome portraits and self-portraits. His classic hand-colored photostat self-portrait from 1972 is a key highlight of an upcoming Christie’s auction. The flush-mounted on board photograph exemplifies Robert Mapplethorpe’s iconoclastic style. His work sparked controversies and debates in the United States regarding the constitutional parameters for freedom of expression.

Another significant lot is a ferrotyped gelatin silver print, Water Tower “Berka/Wipper, Thuringen,” 1996, by Bernd Becher and Hilla Becher. The two German photographers and conceptual artists collaborated for a major photography series on industrial structures. They used a large eight by ten-inch camera to click images of water towers, blast furnaces, gas tanks, and oil refineries among other industrial objects. The auction also features a photograph of Francis Bacon by Peter Beard. It shows Bacon sitting on the roof of his house at 80 Narrow Street, London. Beard and Bacon felt an instant connection to each other when they met. They shared a strong friendship and were mutual admirers. To view the complete catalog and register to bid online, visit Christie’s.