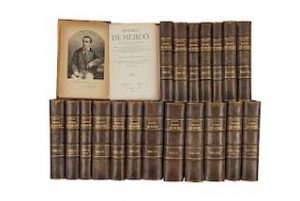 will offer the upcoming Rare Books and Documents auction in late November. It will include the book and document collections of Denegre Vaught and Pérez de Salazar. Among the historical papers, a single-page pronouncement on the freedom to trade salted meat and tallow will be featured. It was signed by Miguel Hidalgo, a Mexican Catholic priest and a leader of the Mexican War of Independence, as well as José de Iturrigaray, Viceroy of New Spain.

There are also many notable books under the gavel, including an early edition, 3-volume set of History of the Conquest of Mexico by William H. Prescott. He was an American historian and Hispanist who was well-known as an intellectual of his time. There are also several sets of historical photographs. One notable lot includes photos by Manual Ramos depicting the “Tragic Ten Days.” The portrayed events took place in Mexico City during the Mexican Revolution, leading to a coup d’état and the assassination of President Francisco I. Madero. View any of these lots and register to bid on Bidsquare