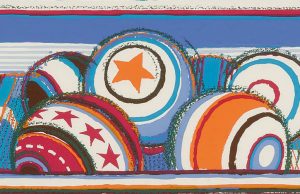 After the success of his 1960s Campbell’s Soup series, Andy Warhol began creating screenprints of celebrities to honor stars after their deaths. Among the subjects captured by the Pop artist is a portrait of American movie star and Princess of Monaco, Grace Kelly. Completed in 1984, two years after her death, the portrait is based on a still from Kelly’s cinematic debut in Fourteen Hours. This piece was completed for a fundraiser benefiting the Institute of Contemporary Art in Philadelphia, where Kelly was born. This Warhol piece will be offered in the upcoming Prints & Multiples Online auction, presented by Sotheby’s.

Roy Lichtenstein’s 1965 screenprint titled Reverie is also among the featured lots. The title refers to the song Stardust by Hoagy Carmichael, in which the singer sadly recalls the old days before two lovers had to part. Executed in yellow, red, blue and black, the picture was made using Benday dots and stripes. Also available is a piece from Turner Prize winner Grayson Perry, titled The Island of Bad Art. Perry’s etching resembles 16th-century Venice. To view these lots and register to bid, visit Sotheby’s.