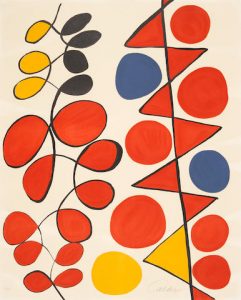 One of the featured artists in the upcoming Bonhams Prints & Multiples auction is cultural icon Andy Warhol. A leading figure of the Pop Art movement, Warhol photographed boxer Muhammad Ali in 1977 as part of his Athletes series. The complete set of four Ali screenprints (numbered 2 of 150) are up for auction in a single lot, as well as individually-offered paintings depicting Chairman Mao, Marilyn Monroe, and others.

Also featured in the sale are 15 prints by Marc Chagall. The Russian-French artist created paintings, drawings, book illustrations, stage sets, ceramic tapestries, and fine art prints. Though he was considered an early Modernist and was sometimes grouped into Cubism, Fauvism, and Symbolism, Chagall considered his work to primarily be an act of self-expression. Also in the auction are works by well-known artists such as Pablo Picasso, Keith Haring, Rembrandt Harmensz Van Rijn, Joan Miró, Jim Dine, and more. View any of these lots and register to bid at Bonhams.