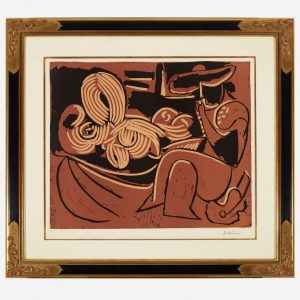 Roy Lichtenstein turned images from popular culture to art, much like his contemporaries Andy Warhol and Robert Rauschenberg. Several works by Lichtenstein are available in Rago’s upcoming Prints + Multiples auction. Pop Art received criticism for focusing on mundane mass-produced objects and imagery. Lichtenstein changed that by drawing attention to objects that are often overlooked. The available collection of ten screenprints and collages by Lichtenstein comes from his Entablature series. Tyler Graphics published the prints in 1976.

Another notable artist with work available in the sale is Julian Opie. Like Lichtenstein, Opie uses simple lines to create his subjects. His portraits and animated walking figures have made their way to the Dentsu Building in Tokyo, City Hall Park in New York, and Regent’s Palace in London. A set of six screenprints, together titled Elena and Cressie get ready for the party, are available in the auction. Opie used an inkjet background to bring out the playful colors of the prints. Also on offer is Pablo Picasso’s Femme Couchée et Homme à la Guitare, a color linocut that depicts a reclining woman and a man wearing a hat. It is signed and numbered ‘47/50 Picasso.’ View the complete catalog and register to bid by visiting Rago.