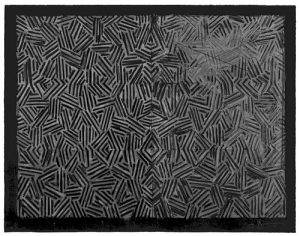 Beginning in the early 1960s, American artist, film director, and producer Andy Warhol became a leading figure in the Pop Art movement. He was best-known in his early career for his depictions of Campbell’s soup cans and Coca-Cola bottles. Warhol’s fame grew from there until he died in 1987. Highlighted in this upcoming Prints and Multiples auction are three of his signed and dated screenprints of Jane Fonda. The three works show the actress’ face in different color schemes.

Another popular American Pop artist was Jasper Johns, who became famous in the 1950s for his paintings of ordinary objects such as flags, targets, and other patriotic items. His most notable work was a painting of the United States flag in 1954 and 1955. In this Hindman auction is a 1976 lithograph from Johns titled Corpse and Mirror. The piece is signed, dated, and numbered 15/58 in white pencil. Also featured are works from artists such as Vija Celmins, Frank Stella, Rembrandt Harmenszoon van Rijn, and Käthe Kollwitz. Visit Bidsquare to view the whole collection and to register to bid.