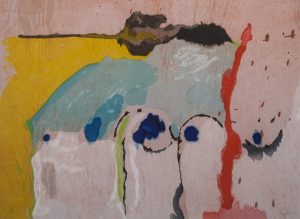 A painter and sculptor, Robert Longo is known for his signature Men in the Cities series showing dapper corporate figures involved in contorting motions. The upcoming Prints and Multiples auction, presented by Hindman, presents a lithograph titled Men in the Cities: Raphael and Barbara by Longo. It shows two formally dressed subjects throwing dramatic poses for the camera. For these productions, Longo threw different objects at his sharply dressed friends, including Cindy Sherman, and captured them in their responses. The aggressive, protective, and other natural reactions deliver energy to these portraits.

Also showcased is a color silkscreen on polished stainless steel titled Panni (from the Drape Suite) by Italian painter and art theorist Michelangelo Pistoletto. This piece is an example of his screenprints on reflective backgrounds. Through his mirror paintings, the artist intends to include the viewer in the artwork. This auction also features pieces from 20th-century Pop artists Andy Warhol and Roy Lichtenstein. A 1963 offset lithograph titled Crying Girl inspired by Lichtenstein’s comic strip panel Secret Hearts is particularly highlighted. A colored woodcut by Gustave Baumann, an etching by Pablo Picasso, and prints from Pierre-Auguste Renoir and Joan Miró are offered as well. Interested collectors can explore the full listings and register to bid online on Bidsquare.