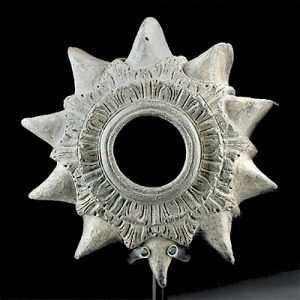 The Asmat people of modern-day Indonesia took the job of respecting their dead seriously. The skull of an Asmat person is one of the most striking lots in the Pre-Columbian, Tribal, and Ethnographic auction presented by Artemis Gallery. The eyes and nose are not only covered in soil, sap, bright shells, and beads to decorate the skull but also to keep evil spirits away. This lot, like many others included in this auction, blurs the line between anthropology and fine art and offers bidders a chance to own an item they may not have thought possible before.

Among the lots with the highest estimated value is the near-complete skeleton of a Chinese Psittacosaurus dinosaur. This dinosaur had a parrot-like skull and used its strong back legs to prowl modern-day Mongolia. Those interested in dinosaurs should also consider the fossilized Hadrosaur dinosaur egg. The Hadrosauridae were a family of duck-billed dinosaurs, and this particular egg was found in modern-day China. Artemis Gallery notes that much of the original scaly texture of the eggshell is still present. Those bidding with a smaller budget will still find valuable lots in this auction. A Mexican pottery figure from the Pre-Columbian era is available for an estimated price of $250-$350. The figure’s pronounced breasts and abdomen indicate it may have been used as a fertility symbol. Those interested in any of these pieces can view each lot and register to bid online on Bidsquare.