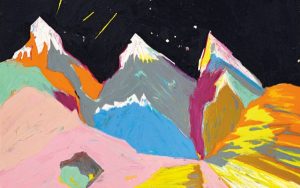 The Post-War to Present auction, offered by Christie’s, presents fine art produced by some of the most notable artists of the 20th century, as well as emerging voices.

Andy Warhol’s “Flowers” headlines with an estimated value of $1.5 to $2 million. For the leading figure in pop art, the “Flowers” series marks a more somber examination of American pop culture. The bright, chromatic pinks and reds of the flowers create a stark contrast with the black background. “When Warhol made Flowers, it reflected the urban, dark, death side of that whole movement,” writes John O’Connor and Benjamin Liu in Unseen Warhol (1996).

Another 20th-century icon represented in this auction is Yayoi Kusama with “Infinity-Nets (QPOW)”. Kusama is originally from Japan, and her work often features influences of pop art, minimalism, and abstract expressionism. It was after she moved from her native Japan to New York that she began making the infinity net series, of which this piece is an excellent example.

Those looking to acquire pieces by emerging artists should consider Nicolas Party’s “Blakam’s Stone (Lime)”. The piece’s acrylic green gives the piece a vibrant appearance, and the stone offers an interesting, warped view of the subject. Bel Fullana’s “Pool Party”, meanwhile, is a fun and unabashed look at sexuality. View each of these lots and register to bid on the Christie’s website.