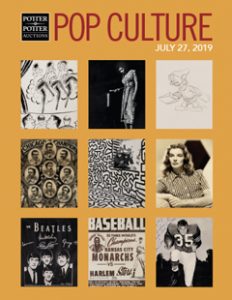 One of the most delightful parts of pop culture is nostalgia. Pop Culture, offered by Potter & Potter Auction, is a collection of toys, illustrations, collectibles not only fascinate but evoke memories. The auction shares over 900 lots of exemplary collection including vintage toys such as Walter Lantz signed woody woodpecker and chilly willy dolls. Exhibited alongside the Library of astronaut books and photographs with the signature of Neil Armstrong, stands “Yellow Submarine” drawing with autographs of all four Beatles, which is the highest estimation at $10,000. Likewise, Walt Disney Studios’ dwarf from Snow white is an animation reminiscent at a glance. A call out to all the Marvel fans as the auction withholds Spider-man print with the signature of the creator of Marvel Comics’, Stan Lee. To revisit moments in pop culture, view the full sale catalog on Potter & Potter Auction.