Photographs from the Ginny Williams Collection 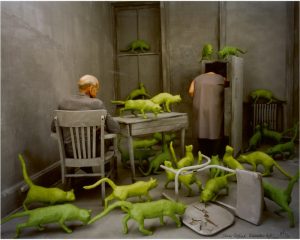 A model, actress, and political activist, Tina Modotti was introduced to the world of photography by her mentor and partner Edward Weston. After her husband’s death, Modotti moved to Mexico City with Weston in 1923. There, she managed Weston’s studio in exchange for photography lessons. Although Weston influenced Modotti, she developed a distinctive photographic viewpoint as she devised architectural studies, still lifes, portraits, and nude compositions. The upcoming auction, presented by Sotheby’s, highlights a photograph titled Interior of Church Tower at Tepotzotlán, Mexico by Modotti. This platinum print of a church interior was taken during her visit to the Mexican town of Tepotzotlán in 1924.

The sale, which offers photographs from the collection of Ginny Williams, also features a gelatin silver print titled Dunes, Oceano by Weston. He began his signature studies of the massive dunes at Oceano in 1934. However, it was not until 1936 that he won a Guggenheim Fellowship for his studies, making Weston the first photographer to receive the grant. Rounding out the sale are works from 20th-century artists such as Ruth Bernhard, Irving Penn, Ansel Adams, and David Hockney. Interested collectors can explore the full listings and register to bid online on Sotheby’s.