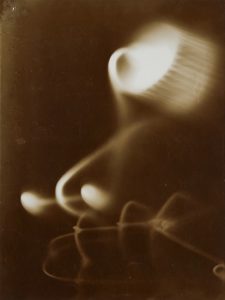 For pioneering Bauhaus artist László Moholy-Nagy, photography offered a completely different viewing experience from the naked eye. The constructivist favored technology in his work and often experimented with both new and old artmaking techniques. He was particularly interested in photograms, which yielded realistic images without a camera by exposing photographic paper to light. Moholy-Nagy even believed that the photogram was “the real key to photography.” Phillips’ upcoming Photography sale will feature a 1920s experimental photogram by László Moholy-Nagy. The available lot shows the blurred image of a muzzle, a film spool, and a child’s rattle. Moholy-Nagy wrote extensive annotations in pencil on the back.

Phillips’ October photography auction will also highlight a panoramic image created by Peter Beard depicting Francis Bacon’s studio in 1976. At the time, Bacon was working on the central panel of his famous Triptych (1976). For this image, Beard took three consecutive exposures of the artist’s workspace. Paint cans litter the ground and a group of framed photos honor the recently deceased George Dyer. The auction catalog includes works by other notable photographers of the 20th and 21st centuries. Among them is a Cindy Sherman court jester self-portrait designed for Harper’s Bazaar and a retroreflective screenprint by Hank Willis Thomas. Visit Phillips’ website for the full listings and to place a bid.