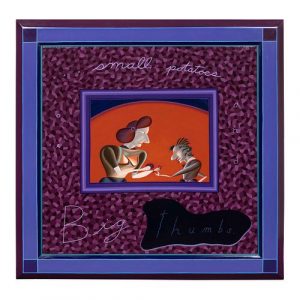 Hindman’s upcoming Post War and Contemporary Art auction will feature a 1977 acrylic painting by Jim Nutt, a Chicago Imagist and founding member of the Hairy Who art group. Six art school graduates gathered in Chicago to form the group in the mid-1960s, combining forces to snag gallery space in a competitive market. Their work is often contrasted with the slick Pop Art flowing from New York. The style of the Hairy Who was more frequently described as “sweaty, nervous, sometimes giggly or goofy,” according to Hyperallergic. The available Nutt painting is titled Shouldn’t We Be More Carefull? [sic]. It depicts a maternal figure tending to the outstretched hand of a young boy. The viewer can gather more context for the scene from the purple words surrounding the figures: “… small potatoes or/ and Big Thumbs.”

The sale also includes works from other founding members of the Hairy Who. From Gladys Nilsson, the wife of Jim Nutt, is a Plexiglass painting made a few years before the Hairy Who group officially formed. Chicago Imagist collectors will find pieces from Karl Wirsum and Suellen Rocca as well. Visit Bidsquare to view the full catalog and register to bid in the Post War and Contemporary Art auction.