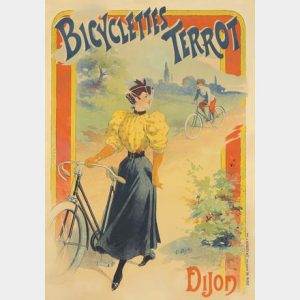 One highlight of the auction is a monogrammed print by Henri de Toulouse-Lautrec, featuring a horse-drawn carriage through the countryside with the trailing figure of a dog. This print is numbered 68 of 100 and is expected to sell above US$100,000. Also find an early original portrait of Fidel Castro by Eladio Rivadulla, drawn in crayon and pencil on paper soon after Castro’s army took control of Cuba in January 1959. For travel poster collectors there is an art nouveau advertisement of an around-the-world experience by sea and rail. The auction house calls this “one of the most magnificent travel posters ever created.” Explore all lots from the sale and register to bid at Poster Auctions International.