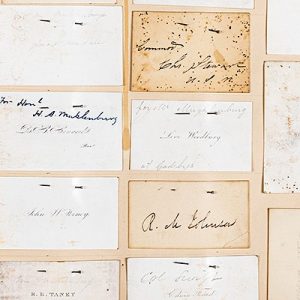 The printed word is one of the pivotal tools of humanity, an invention that has never ceased to describe, catalog, entertain, and record. To analyze history is to analyze the literature and ephemera that was left behind. Pook & Pook, Inc. makes its first foray into the realm of printed and handwritten material in the upcoming Online Only Books, Ephemera & Historical Prints auction.

However, this auction is not a mere homage to books or history. Rather, Pook & Pook embraces their Pennsylvania background and heritage, celebrating centuries of religiosity, political commentary, and pastoral life. The outstanding lot of this auction is an autograph album assembled by the family that founded the Lutheran Church of America. The many signatures, invitations, and receipts on those pages tell a story of business and intrigue, written in the hands of those who built a new, revolutionary nation.

Tucked in the folds of old newspapers, land deeds, and maps is a culture that formed America as we know it today.  A signed check from founding father Aaron Burr is a relic not to be missed, while several Currier & Ives lithographs depict everything from the Confederate president being chased in a petticoat to America’s favorite pastime. View all 307 lots and visit Bidsquare to bid online.