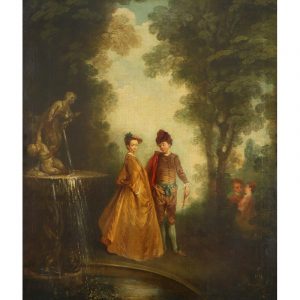 Nicolas de Largillière was a French artist known as one of Europe’s premier portrait painters. For his acceptance into the French Academy in 1686, Largillière painted a portrait of Le Brun, the chairman of the academy. He also painted the portraits of the Governor of Arras in 1693 and the royal family of Louis XIV in 1709. Showcased in Woolley & Wallis’ upcoming Old Masters, British & European Paintings auction is Largillière’s oil painting portrait of Monsieur Aubert, General Director of the Bridges and Roads of France. This painting shows the Director in a red overcoat standing next to a table covered in books.

Born in the Netherlands in 1603, Aert van der Neer was a Dutch painter known for his nocturnal landscape paintings and his winter scenes. He was considered a master at representing light. Van der Neer used a limited palette of earthy colors when painting to embody the Dutch landscape. Offered in this event is a van der Neer oil painting titled Sunset Over a Riverside Village. The painting shows a moonlit river with buildings and people on either side. To view the whole collection of paintings and register to bid, visit Woolley & Wallis.