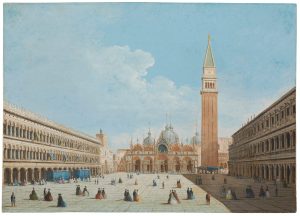 In the 18th century, young British aristocrats began traveling more frequently around the world to see the major sights, a practice called the Grand Tour. A Venetian artist named Canaletto benefitted so much from the patronage of British travelers on the Grand Tour that he eventually moved to their country. A drawing from Canaletto’s time in England is one of the highlighted lots in the upcoming Old Master & British Drawings auction, presented by Christie’s. The drawing depicts a southern view of Warwick Castle, a medieval structure near the River Avon. It was commissioned by Francis Greville, the first Earl of Warwick.

The auction’s 129 lots represent European art from 14th century artists such as Carracci to 19th century artists such as J.M.W. Turner. The latter lived in London but was inspired primarily by landscapes he saw while traveling. Examples of these pieces include a pencil and watercolor piece of the countryside outside of Launceston, a town in Cornwall. In the drawing, a single rider on horseback approaches the town looming above him. Another available example of Turner’s work is a watercolor painting of Mont-Blanc, a mountain on the border of France and Italy.

Also featured in this event is a funerary medallion design by Gian Lorenzo Bernini. In the drawing, a skeleton closes the lid on a clergyman’s sarcophagus. Below the drawing is written instructions by Bernini, including notes on how to ensure long-term preservation. Register to bid and view individual lots on Christie’s website.