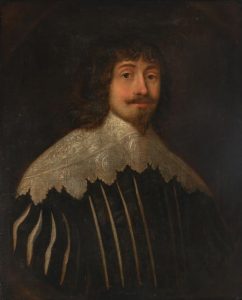 Hieronymus Francken I came from an eminent family of Flemish artists. Francken’s earlier works show the influence of his travel to Italy during the 1560s. During the reign of King Henri III, paintings showing scenes from the Valois court became briefly popular. Francken followed the trend by depicting elegant people feasting and dancing in his works. One such painting capturing an allegorical story will be featured in the upcoming Old Master & 19th-Century Paintings, Drawings, & Sculpture auction, presented by Doyle. Titled A Banquet Scene: An Allegory on Love and Lust, the piece shows the folly and destructive dissipation of carnality.

Émile Friant’s oil painting is also highlighted in this sale. A naturalist painter, Émile Friant was committed to depicting the everyday life of the rural working class. The available work is a portrait of Charles Frederick Worth, executed in 1893. Also offered is a marble statue by John Gibson depicting a female bust. The British Neoclassical sculptor is credited with reviving the ancient Greek practice of tinting marble. View these items and register to bid online on Doyle.