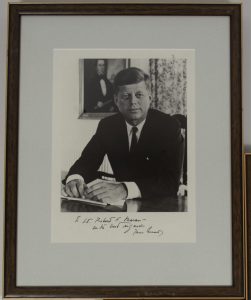 During the Victorian period, Christmas toys and games were quite popular. In 1897, McLoughlin Brothers capitalized on the growing Christmas market by issuing a board game called ‘Game of the Visit of Santa Claus.’ The game, which became an instant hit, was designed so that players receive gifts from Santa as he flies in his sleigh around the board, celebrating the growing consumerism of the holiday. One edition of the game that highlights its multi-color lithography on both the cover and the board will be featured in the upcoming November Discovery Auction offered by Oakridge Auction Gallery.

This auction will also feature a range of fine art, antiques, and collectibles. Among the lots in this auction are autographed photographs and artifacts from presidents Harry S. Truman, John F. Kennedy, Lyndon B. Johnson, Richard Nixon, and George H. W. Bush. Other interesting works include sets of French decorative containers, designed by Henriot Quimper and Luneville. To view the catalog and register to bid online, visit Invaluable.