Nourishment for the Soul: The Herrmann Collection of Prints by Pablo Picasso 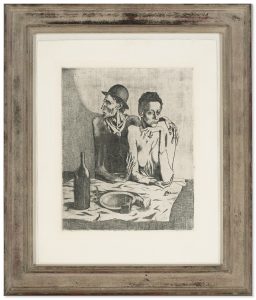 Pablo Picasso was a prominent 20th-century artist known for his Cubist paintings. Picasso was a co-founder of the Cubist movement and a multi-faceted artist with mastery in painting, sculpture, and printmaking. From the age of seven, the Spanish painter was drawn toward art and received early training from his father. Picasso’s work is often classified into different periods and has elaborate themes that run through his oeuvre. The upcoming Christie’s event presents a selection of Picasso’s prints from 1904 to 1937. The highlight is Le Repas Frugal, an etching from La suite des Saltimbanques by Picasso. Created during the Blue Period, the piece has monochromatic tones and explores the theme of malnutrition.

Also featured is a 1934 work titled Minotaure aveugle guidé par une fillette dans la nuit, showing a mythological creature with the body of a man and the heard of a bull. While explaining complex human nature through the image of the minotaur, Picasso said, “If all the ways I have been along were marked in a map and joined up with a line, it might represent a minotaur.” The available print by Picasso employed his burnished aquatint technique, offering a dreamy effect. Proceeds from this sale will assist food banks and hunger-relief organizations, including Second Harvest Food Bank Orange County, CA and Feeding America. Interested collectors can explore the full listings and register to bid online on Christie’s.