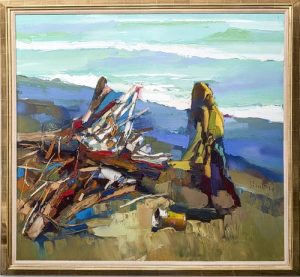 Italian painter Nicola Simbari’s early works mostly depict scenes from his everyday life and Mediterranean landscapes. After exploring several painting movements, he developed his own style, which is today known as Simbaresco. Simbari frequently employed expressive strokes and pastel hues in his paintings. The upcoming New York City Estate Auction, presented by Showplace, will feature an oil painting by Nicola Simbari. The piece shows a view of Ostia Beach in bright shades of blue and ochre. The sale will also feature an oil painting from Surrealist artist Alexie Sundukov. It depicts a round brain in black and white.

One notable lot among the 280 available items is Jorge Zalszupin’s T Invertido leather and chrome sofa. Zalszupin was a 20th-century designer recognized for his modern style. In the 1950s, the designer started a furniture manufacturing company called L’Atelier in São Paulo, Brazil. The offered two-seat sofa has a tufted back and stands on a T Invertido base. Register to bid online and view the complete listings on Bidsquare.