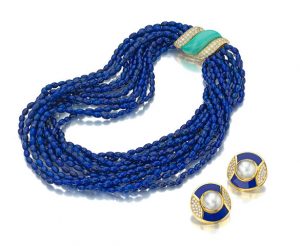 The velvet blue Kashmir sapphire was first found in the 18th century and is among the most highly-valued sapphires on the market today. Kashmir sapphires were discovered in the Himalayan mountains at a height of 4,500 meters. Mining operations from 1882 to 1887 led to the discovery of high-quality large sapphires. However, production soon began to decline. The Maharaja of Kashmir sought the help of British geologists to carry out mining surveys in the hope of finding more sapphire deposits. Unfortunately, the geologists declared the mines were depleted and confirmed no more deposits of sapphire in the adjoining areas. Bonhams’ upcoming New York Jewels Auction presents two unmounted Kashmir sapphires. One of them, offered with a high estimate of USD 775,000, is an AGL-certified, 9.23-carat, cushion-shaped Kashmir sapphire.

Another highlight is an 18-karat gold, ruby, and enamel Serpenti Secret watch by Bulgari. Hidden under the blue and green snakehead is a self-winding movement Jaeger-LeCoultre watch. Also showcased is a gold and gem-set ballerina brooch by John Rubel Co. and a pair of sapphire, emerald, and diamond bracelets by Oscar Heyman & Brothers. Timepieces by Patek Philippe & Co., Rolex, Piaget, and Audemars Piguet, and jewelry by Cartier, Van Cleef & Arpels, and Tiffany & Co. complete the auction. Interested collectors can explore the full listings and register to bid online on Bonhams.