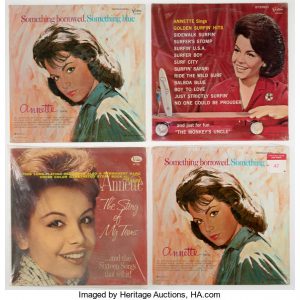 One of the highlights of the auction includes four Beatles-themed plastic miniature guitars on backing cards. Each guitar features a Beatle on the front with a short bio on the back of the packaging. Another highlight is a Nirvana/Mudhoney Fox Theatre concert poster (1991). The concert was held a month after the release of their second album, Nevermind. Since the concert in Portland was timed two days before Halloween, small witches and pumpkins line the poster’s border.

The autographs and signed items include a collection of three signatures on 3″ x 5″ cards, featuring Louis Armstrong, Count Basie, and Benny Goodman and a mono cut-out copy of the second album from R&B stars the Four Tops, with autographs on the front cover in black felt ink by each of the group’s four members.

To view the complete catalog and register to bid online, visit Heritage Auctions.