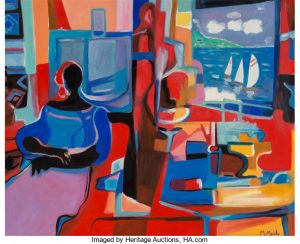 The Monthly Fine & Decorative Art Online Auction for August, offered by Heritage Auctions, is anchored by several interesting works of fine art. A few works receiving the earliest interest are those by French artist Marcel Mouly. Mouly solidified his plans to become an artist when, after a trip to Germany, he was mistakenly arrested and imprisoned as a spy. Primarily an abstract artist, he was friends with Picasso and Chagall, and exhibited his work as part of the Salon du Mai, an association formed of French artists in opposition to Nazi ideology and its condemnation of “degenerate art.” Also, of interest are a pair of pen and ink drawings by jazz great Miles Davis. Of his art, Davis said in his autobiography: “It’s like therapy for me, and it keeps my mind occupied with something when I’m not playing music.” Davis became serious about visual art in 1980, during a long period of recovery from addiction, and continued to draw and paint for the rest of his life. There are also many interesting silver pieces for sale, mostly in the form of antique match safes (small metal boxes used to keep matches safe and usable). View any of these lots and register to bid on Heritage Auctions.