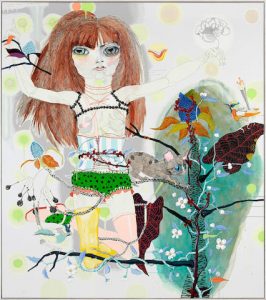 When Julian Schnabel started working on his first plate-painting, he meant to create a work that he had never seen before. His emotive painting broke with the existing minimalistic mood and introduced Neo-Expressionism. The movement captured the New York art scene in the 1970s. Schnabel’s art is characterized by his use of unusual styles and materials, including velvet and broken plates. Featured in the upcoming Modern & Contemporary Art Online Sale, offered by Bonhams, is a mixed media work on a printed map by Schanbel. The 2006 piece shows a gestural application of paint on a map of the San Pedro Channel.

Another key item representing Expressionism is from James Siena, whose rule-based linear paintings are known as “visual algorithms.” Such visual algorithms emerge to become concentrated and vibrantly-colored geometric patterns. The artist worked with a diverse range of media, including lithography, etching, woodcut, engraving, drawing, and painting. Available in this auction is an enamel on aluminum piece titled Doubled Almighty.

This auction also includes over 80 lots of contemporary artworks. Among these is a crayon on paper piece by Françoise Gilot. Known as the muse of Pablo Picasso, Gilot’s paintings were influenced by Cubism before later evolving toward organic forms in the later years of her oeuvre. Explore the full catalog for this auction and register to bid on Bonhams.