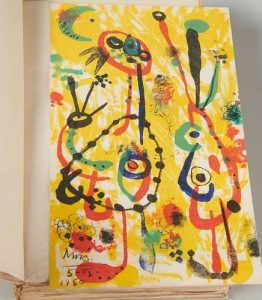 Day 3 of the ABC: Estate Finds auction, presented by Millea Bros. Ltd., will feature important historical and literary books. Leading the event is André Breton’s Anthologie de l’Humour Noir. Known as a founder of literary Surrealism, Breton started developing the book in the 1930s. Breton designed it to be an anthology featuring 45 Surrealist writers. It was published in 1940 and was immediately forbidden by the Vichy regime. The available book is the first revised edition that came out in 1950. This copy bears Breton’s signature and comes with a color lithograph by Joan Miró.

Also featured is the first edition of Poems by British poet Wilfred Owen. Published posthumously in 1920, Poems was edited by Owen’s friend and mentor Siegfried Sassoon. Considered a leading poet of World War I, Owen’s best-known works discuss the horrors of trench warfare. The auction will include books by several Surrealists and modern artists, including Georges Bataille, Angel Zarraga, and Jose Herrera Petere. Explore the full listings and register to bid online on Bidsquare.