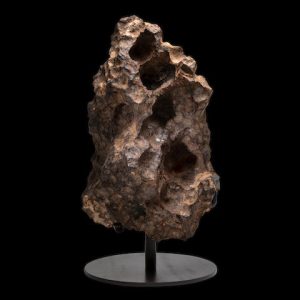 The upcoming Bonhams auction will offer a unique selection of meteorites, tektites, and impact memorabilia. A 600-pound main mass of the Bur-Abor meteorite is highlighted in the event. The present piece features distinctive elements caused by its course through the Earth’s atmosphere. The patterns on the main mass and the surface grooves were naturally created by millions of years in the heavy metal core of an asteroid. The piece remains intact from the day it was found in the Northeastern Province, Kenya.

Another impact memorabilia piece for sale is a recently discovered NWA 13951 lunar meteorite. Local tribespeople discovered it in the Mauritanian Sahara and chose to preserve it exactly as it was found. Less than 750 kilograms of lunar meteorites exist on Earth, comprising 0.1% of all meteoritic finds. An 82.28-gram slice of a Martian main mass is also on offer. Interested bidders can view the full catalog or place a bid on Bonhams.