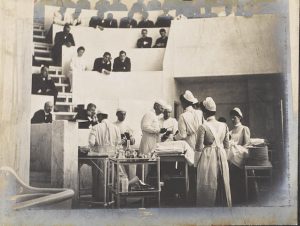 Until the early 20th century, Johns Hopkins Hospital had to build its reputation as a top-flight medical institution despite outdated operating rooms. To raise patients’ heads, for example, surgeons placed books under the legs of the operating table. When new facilities opened in 1904, Surgeon-in-Chief William Halsted decided to celebrate by operating with a full audience. A photo of Halsted’s “All-Star Operation,” as it’s now called, is among the top lots in Bonhams’ timed auction of medical literature and memorabilia. The picture is one of 60 in a photo album detailing Johns Hopkins Hospital’s progress in 1903 and 1904.

Elsewhere in the catalog, bidders will find a first-edition copy of James Yonge’s Wounds of the Brain Proved Curable, published in 1682. At the time, the medical consensus in England was that brain injuries were always fatal. Yonge published Wounds of the Brain to outline his successful brain operation on a young boy. It may have been the first surgery of its kind in England. Also unprecedented is Humphrey Ridley’s The Anatomy of the Brain, a 1695 monograph available in this Bonhams auction. It was the first monograph in the English language fully dedicated to the brain. View the full medical literature and memorabilia catalog and register to bid on Bonhams’ website.