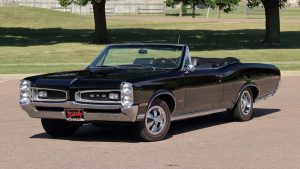 The Oakland Motor Car Company, established in Pontiac, Michigan by Edward Murphy, produced carriages before General Motors it bought out. In the 1920s, General Motors introduced the first Pontiac model as part of the Oakland line. Pontiac models, including the GTO, were popular by the 1960s. Designed by John DeLorean, the GTO was named after a Ferrari coupe, the Gran Turismo Omologato. According to The New York Times, “More than any other G.M. brand, Pontiac stood for performance, speed and sex appeal.” Mecum Auctions’ upcoming Las Vegas 2021 auction brings a 1966 Pontiac GTO convertible. The black car still has its original 389/360 HP engine and four-speed manual transmission.

A 1959 Chevrolet Impala is also highlighted in the upcoming live sale. It was first introduced in 1958 as the Bel Air Impala. It features a 1959 Rochester fuel injection system. The exterior of the car is polished black while the interior is red. Find a range of available cars and register to bid online on Mecum Auctions.