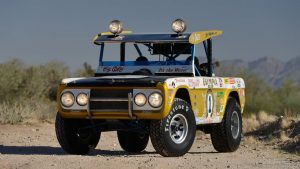 An off-road racing vehicle from the personal collection of Parnelli Jones is a key highlight in Mecum Auctions’ upcoming sale. The 1969 Ford Bronco Big Oly was built to suit the strength, speed, and weight specifications of the renowned former professional racing driver. Jones was the first driver to push past 150 mph in 1962 and won the Indy 500 as a team owner in 1970-71. Jones and Bill Stroppe drove the Ford Bronco to successive victories, bagging the 1971-72 Baja 1000, 1973 Baja 500, and 1973 Mint 40. Featuring two 22-gallon fuel cells, a 351/390hp Ford Windsor V-8 engine powers the vehicle. The ‘Big Oly’ gets its name from a sponsor, Olympia Brewing Company.

For muscle car enthusiasts, a 1971 Plymouth Hemi Cuda convertible in Winchester gray will be available. It is one of 12 Hemi Cuda convertibles built during the year. Powered by the original engine, the car is one of three vehicles equipped with factory A833 4-speed manual transmission. A 1930 Duesenberg model SJ Rollston convertible Victoria also leads the sale. Famous band-leader Paul Whiteman was the first owner of the car and purchased it new in 1930. To view the complete catalog and register to bid online, visit Mecum Auctions.