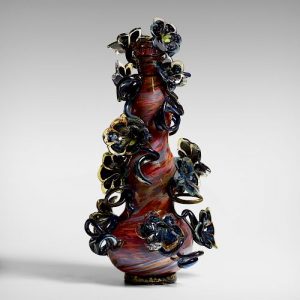 Robert Arneson’s ceramic pieces often combined social commentary and absurdity: a household plate with a pool installed and a scale weighing only five human toes are two examples. But one of his ceramics available in the upcoming Masterworks of American Craft auction, offered by Rago, provides a different perspective. His Big Head of Jackson is a tribute to the late painter Jackson Pollock. Key details include Pollock’s distinct cleft chin and laugh lines. Beyond Arneson’s work, the auction includes 42 other lots of 20th-century fine and decorative art.

In Viola Frey’s Grandmother with Red Hat sculpture, the colors of the grandmother’s clothes spill onto her face and arms. Yellow covers both the left side of her face and left arm. Meanwhile, red traces are visible on her jawline and both her right thumb and index finger. This piece comes to auction from the Morgan Gallery in Kansas City, Missouri. It also appeared in the 1983 exhibition “Viola Frey: Paintings, Sculptures, Drawings” in San Francisco.

Blurring colors is also a key aspect of Dale Chihuly’s Scarlet Lake Swirled Venetian with Flowers, another featured lot in this sale. The hand-blown glass piece comes to auction directly from the artist’s estate. According to his personal website, Chihuly’s glass technique is different from traditional approaches, “…utilizing gravity and centrifugal force to let molten glass find its shape in its own organic way.” Also available in this auction is a lobster and crab box made of gilt metal and designed by Tiffany Studios. It was produced in 1905, twenty years after the studio’s founding. Those interested in this or any other piece can register to bid on Bidsquare.