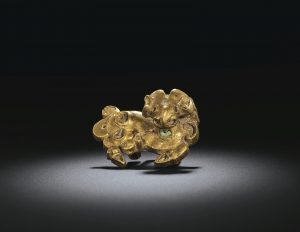 Christie’s Masterpieces of Early Chinese Gold and Silver auction is comprised of a golden collection of pieces from ancient China. Formed by Dr. Johan Carl Kempe, a prominent collector of Chinese art, the objects range in date from spring to autumn (late 6th-early 5th century BC) of the Qang period.  These items are exquisite and rare surviving objects from centuries ago that were used to hold a knot of hair in place or ladle soups. They echo with the functionality and purpose that shaped their production, belonging to dynasties that viewed them as both useful objects and pieces of art.

The auction’s chalices, headpieces, and dishes are also notable for their scarcity and impressive provenance. The sale is very strong in gold and silver works dating from the Tang dynasty, which was an era of great artistic achievement and opulence, due in part to contact with India and the Middle East.  Objects from this period are often of fine quality and detail, and this is reflected in the showcased item, a very rare and important bowl from the Tang dynasty. This bowl is worked in repoussé and features overlapping lotus petals and a center medallion with eight birds in flight.  A similar bowl is in the Met’s permanent collection.

Also included are a gold dragon cup from the Yuan dynasty, a gold and turquoise-inlaid openwork chape(the metal pin of a buckle) from the late 6th-early 5th century BC, and a gold feline head finial spring.  There are items used in ritual and ceremony, jars, bowls, and scissors, as well as boxes and jewelry, cups and spoons.  To view the complete auction catalogue and register to bid go to Christie’s.