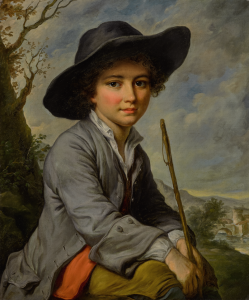 Jan Lievens painted Woman Embraced by a Man in 1626 while working in a studio with Rembrandt. The latter artist even served as the model for the man shown in the painting. He holds the woman’s hand and looks fondly at her. The painting’s whereabouts were unknown for many years until it resurfaced in a 1998 Christie’s auction in Amsterdam. Now, Woman Embraced by a Man is among the highlighted lots in the upcoming Master Paintings Evening Sale, presented by Sotheby’s.

Also available in this auction is the altarpiece titled Madonna of the Rosary with Angels by the Venetian Rococo artist Giovanni Battista Tiepolo. Sotheby’s claims it is the only large altarpiece by Battista that is still privately owned. Among the piece’s notable former owners is South African mining magnate Sir Joseph Benjamin Robinson.

Represented, too, is Peter Paul Rubens with his painting The Virgin and Christ Child, with Saints Elizabeth and John the Baptist. The painting is Rubens’ first known depiction of the meeting of Jesus and John the Baptist, a subject he would revisit many times after. Rubens painted this shortly after returning from Italy, and a video produced by Sotheby’s shows the inspiration Rubens may have found in Leonardo da Vinci and other Italian artists. Those interested in Rubens can also consider his piece The Last Supper, En Grisaille, which is also featured in this auction. A grisaille is a painting created with only grey or other neutral colors. This grisaille painting by Ruben is a reproduction of his altarpiece for St. Rombouts Cathedral. Register to bid and view each lot on the Sotheby’s website.