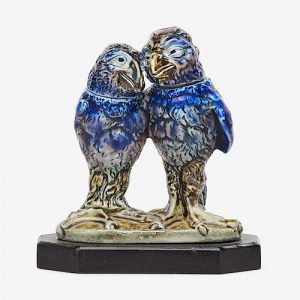 Outside of tobacco jars is a clock produced by Robert Martin in 1875. It contains intricate details, including the Nettle fold coat of arms. The lot’s condition report notes a few small imperfections in the piece that should be studied before bidding. Another eye-catching piece is a double-sided face jug also created by Robert Martin. One of the faces opens its mouth as if it is about to comment. Meanwhile, the other face looks over at the jug’s spout. Interested collectors can register to bid online on Bidsquare.