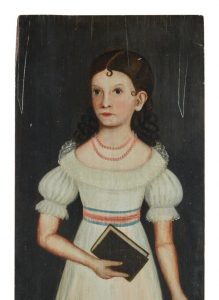 Established in 1642, Martha’s Vineyard was a destination for the whaling community. Located in Massachusetts, it is now known as a vacation spot for the rich and famous. Sotheby’s upcoming auction will feature items from a nautical Martha’s Vineyard collection. Among the featured lots is a 19th-century American School oil painting titled Portrait of Cornelia Eliza Morse. Made around 1830, this painting shows a woman with brown hair wearing a white dress, holding a book in her right hand and a handkerchief in her left.

Another painting on offer is by American artist Keith T. Collis. Titled Young Woman Tending to Her Flock, this late 20th-century oil painting depicts a woman standing in a grassy area, surrounded by colorful flowers. She is shown feeding some geese while another woman cares for a dog. A bright yellow house with a red door stands out in the background. Visit Sotheby’s to view the entire collection and to place a bid.