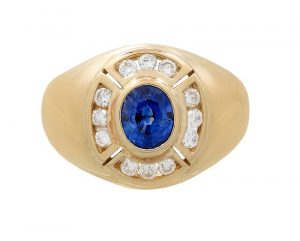 The second day of the upcoming Major Estates Auction will include a Japanese six-panel folding screen from the 18th-century Rinpa school. This piece is made of ink and gouache on gold leaf ground and shows 35 fans above a golden river. Each fan shows a different historical or cultural scene, including flowers, landscapes, animals, and dragons. Developed during Japan’s Edo period, the Rinpa painting style is known for its repeated, symmetrical imagery and references to literature.

Other notable lots in this sale, presented by New Orleans Auction Galleries, include a painting by George Rodrigue and an untitled work by Ida Rittenberg Kohlmeyer. Rodrigue’s acrylic piece, titled Home Office Blues, pictures his signature Blue Dog sitting in an office chair. Resulting from Rodrigue’s collaboration with Xerox during the brand’s 2000 advertising campaign, an image of the dog is seen emerging from a printer.

Several pieces of jewelry are also among the leading lots, including a pair of dress clips made with baguette-cut diamonds. Representing the available furniture lots is a rosewood cabinet from the American Aesthetic Movement. Responding to the Industrial Revolution and higher levels of consumption, Aesthetic artists and designers sought to elevate decorative art back to its former standards of beauty. This cabinet is attributed to Pottier & Stymus, likely commissioned for one of John D. Rockefeller’s partners in Standard Oil. Explore the full catalog and register to bid on Invaluable.