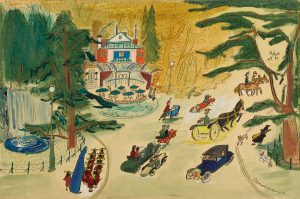 Sotheby’s Madeline and More: The Whimsical World of Ludwig Bemelmans auction offers a selection of paintings, illustrations, and sketches by 20th-century artist Ludwig Bemelmans. Among the available illustrations are several early Bemelmans works from his Madeline book series. This series follows the adventures of seven-year-old Madeline, a red-haired girl attending a Catholic boarding school in Paris with 11 other girls.

One of the offered art pieces was executed in 1957 for Madeline and the Bad Hat. The illustration shows Madeline and the other girls walking down the streets of Paris. It offers a window into everyday Parisian life. Another highlighted lot is from Bemelmans’ lesser-known publication titled The High World. Completed in 1954, this mixed media piece depicts the two worlds of the opulent and the poor. View the full selection of fine art and register to bid by visiting Sotheby’s.