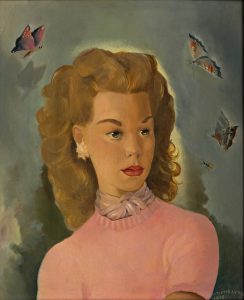 Much of Swann Galleries’ second annual auction highlighting the art, material culture, and history of the LGBTQ+ community contains items from the 20th century. There are also a few lots from the 19th century, including a pair of Oscar Wilde autographs, an albumen print of Wilde, and a portrait of Walt Whitman.

One of the featured lots of fine art from the 20th century is a sculpture titled Quo Vadis by Richmond Barthé. The bronze was inspired by actor Robert Taylor, who played Nero in the Hollywood movie version of Quo Vadis (1951). No other cast examples of this bronze have been found. Also up for bid are several prints by photographer Robert Mapplethorpe, including signed pieces showing Black Jack, Milton White, and an untitled silver print nude with hand-tinting and the inscription “For Henry – from one cowboy to another.” There are also bathing portraits of Mapplethorpe and Keith Haring by photographer Don Herron.

Other features of the sale include works by and about Andy Warhol, several rare pieces by David Wojnarowicz, a selection of vintage posters, and more. A portion of the auction proceeds will benefit the NYC LGBT Historic Sites Project. For more coverage of this event, explore this Auction Daily article. View any of these lots and register to bid on the Swann Galleries website.