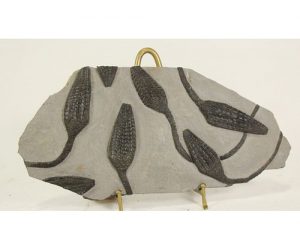 Nearly 300 million years ago, crinoids populated the deep waters of the seas. They were commonly found in the Paleozoic and Mesozoic periods. However, the species came close to extinction at the end of the Permian era. A crinoid fossil plate is among the leading lots of Lewis and Maese Auctions’ upcoming sale. The plate shows the preserved remains several crinoids, which have cup-shaped bodies and flexible arms.

The auction will include a collection of fossils, rocks, and gemstones. An amethyst geode slice on a custom metal stand is particularly notable. This slice weighs approximately 400 pounds and stands nearly six feet tall. The sale also features a polished piece of lapis lazuli from Afghanistan. Excavated from the Hindu Kush mountains, the piece holds spiritual connotations. Many ancient cultures believed lapis lazuli could dispel negative energy. Browse the full selection of fossils, gemstones, and rocks on Bidsquare.