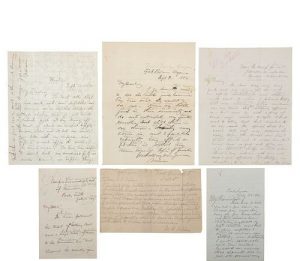 General Nelson Appleton Miles was known as a Civil War hero, Medal of Honor recipient, a leader of Army operations during the Indian Wars. He was also the last Commanding General of the United States Army. Cowan’s Auctions will feature a significant archive of letters written by General Miles to his wife Mary Hoyt Sherman in an upcoming sale. The collection spans from 1863 to 1913 with the majority written between 1867 to 1894.

Also featured in the American Historical Ephemera and Photography auction is a set of three cased images. The first is a half plate early photograph of miners at Angel’s Camp in Calaveras County, California. This shows six men posing at their mining site. Also included is an 1855 sixth plate portrait of John Comstock as well as an 1855 ninth plate of a man known as “Peaty.” View the entire catalog and register to bid on Bidsquare.