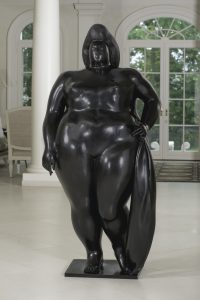 Fernando Botero is among the featured artists in the upcoming Latin American Art auction, presenting 14 of the 187 available lots. Botero is one of the most recognized and admired artists of Latin America, creating his own signature style. Boterismo depicts people and figures in large, exaggerated shapes that suggest satire or criticism of society. At the height of his career, he created works such as Tablao flamenco and Venus, both of which will be auctioned in this sale offered by Christie’s.

Other artists that stand out in the auction are Francisco Toledo, Rufino Tamayo, Diego Rivera, and more. Rivera’s watercolor and charcoal painting, Vendedora de Flores en Tehuantepec, was signed and dated in 1935. This auction will also feature Frida Kahlo’s The Flower Basket, an oil painting on a piece of copper, held in an unusual circular frame. To bid online and view the full catalog, visit Christie’s.