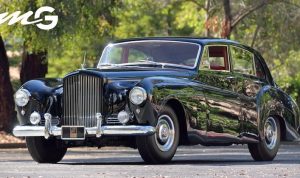 In a coal shed in Detroit, Michigan, Henry Ford built his first experimental car in 1896 and named it the “Quadricycle.” After a few years, a motor company under Ford’s name was incorporated with 12 investors. Since then, Ford’s purpose has been to drive human progress through freedom of movement. It is now one of the largest motor manufacturers in the world. A 2018 Ford GT vehicle is among the highlights of the upcoming Las Vegas Motorcycle Auction, offered by Mecum.

The auction will also include a Chevrolet Corvette convertible. Produced in 1970, this automobile has a Monza red interior and power brakes. Also featured in the sale is a 1955 Bentley S1 Freestone & Webb Light Saloon, designed by Freestone & Webb. This model was one of only seven cars to be manufactured in this style. The Autocar, a British magazine, wrote about 1955 Bentley at its debut: “The latest Bentley model offers a degree of safety, comfort, and performance that is beyond the experience and perhaps even the imagination of the majority of the world’s motorists.” To view more items and register to bid online, visit Mecum.