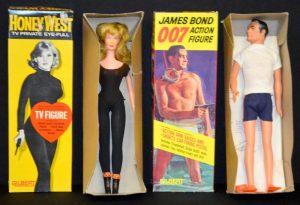 Explore the Barbie land with Barbie, her friends, and relatives in the June Anderson Barbies Auction by Tom Harris auctions. Presented in the auction is an assorted collection of Barbies, toys, comics and more. Mattel Barbie is a popular choice among Barbie collectors. And the live-action PJ dolls ‘Charlie and Ken’ accompanied by a rotating stage. These dolls, dressed in a variety of POP costumes, were a revolution in the Barbie world with moving features.

Various Beatles dolls are the most sought-after items, as the Beatles are one of the most popular musical groups in the world. Like the featured collectible, a set of 1964 Bobbin Head car mascots of the Beatles. Hasbro is a well-known name when it comes to action figures. The set of two G.I. Joe action figures of a sailor and a marine are the highlights among Hasbro toys. The auction will host comic books, newsletters, reference books, accessories, Hallmark Barbie related items, magazine doll cut-outs, dollhouse furniture and more. Explore the full listings and register to bid online on invaluable.