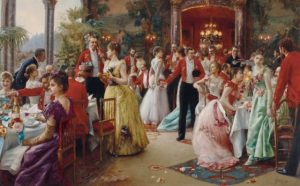 Julius LeBlanc Stewart’s The Hunt Supper is one of the highlighted lots in the upcoming European Art Part I auction, presented by Christie’s. The 1889 oil painting shows some of the most famous celebrities of the late 19th century enjoying a meal in a terraced setting. The Hunt Supper was created in the theme of Stewart’s earlier work, The Hunt Ball, which received great acclaim. An American painter, Stewart was known for his multi-figural paintings that often depicted Parisian life. As the auction house notes, “[Stewart] paints the festivals and diversions in which he shares, as only he can who enters into them body and soul.”

This event offers 37 fine art pieces from 19th-century European artists. Among them is Herbert James Draper’s The Mountain Mists. Many of Draper’s works depict a variety of mythological subjects such as sea nymphs. The available piece shows several figures floating through an alpine landscape. In the painting, the heat of the sun harms the three figures. Among the spotlights are important works by Peder Severin Krøyer, Gustav Bauernfeind, and William Adolphe Bouguereau. Register to bid for these lots by visiting Christie’s.