Jewels: Made in America 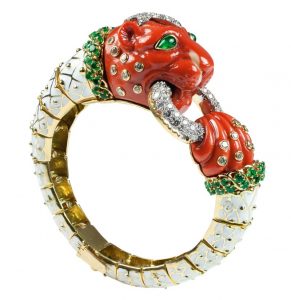 Self-taught designer David Webb created his first animal-inspired bracelet – an Indian sea monster– in 1957. The bracelet was purchased by Elizabeth Taylor and is now known as the Elizabeth Taylor Makara Bracelet. Since that time, Webb’s animal-inspired jewelry has increased in popularity. These pieces, composed of gold, gemstones, and enamel, have been seen on Jacqueline Kennedy, Princess Grace of Monaco, and Diana Vreeland. David Webb once said, “Women are tired of jewelry-looking jewelry, and they want one-of-a-kind pieces… Animals are here to stay.” The upcoming Jewels: Made in America auction, offered by Sotheby’s, presents a lion bangle-bracelet by Webb. The lion is composed of carved coral, round diamonds, and emeralds on cross-hatched white enamel.

Another highlight of the auction is a “Tiara Feather” cuff bracelet by Fulco di Verdura. Based on the “Feather Headdress” tiara Verdura designed for Betsey Cushing Whitney in the 1950s, the design is inspired by Native American feather headdresses. The cuff bracelet is rendered in 18-karat etched gold and diamonds. Also showcased is a diamond flower brooch from Oscar Heyman & Brothers, as well as jewelry pieces by Tiffany & Co., Harry Winston, and Seaman Schepps. Explore the full listings and register to bid online on Sotheby’s.