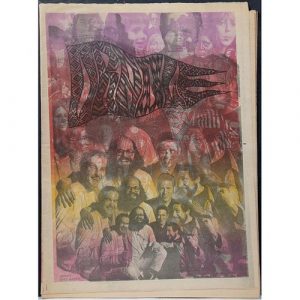 Allen Cohen and his colleagues gained creative control of The San Francisco Oracle by its third issue. Together, they transformed it into what Cohen called “the Rosetta Stone of that forgotten civilization called The Hippies.” A copy of the publication’s third issue is on offer in this Turner Auctions sale. Bidders will notice an editorial from poet Gary Snyder in this paper critiquing Buddhism for, in his view, ignoring social issues. Framing the article is a collage that juxtaposes traditional Buddhist images with those of hippies, Captain America, and others.

Lot #25 in this sale offers a collection of The San Francisco Oracle issues. That includes issue #4 and issues #7 – #12. Poet Allen Ginsberg appears prominently both on the cover and in the contents of issue #7. The multi-colored, psychedelic design of the issue’s cover is reminiscent of Allen Cohen’s early vision of a newspaper full of rainbows. Register to bid and view each of the lots on Bidsquare. Those who would like to learn more about the sale can also read Auction Daily’s upcoming extended coverage.